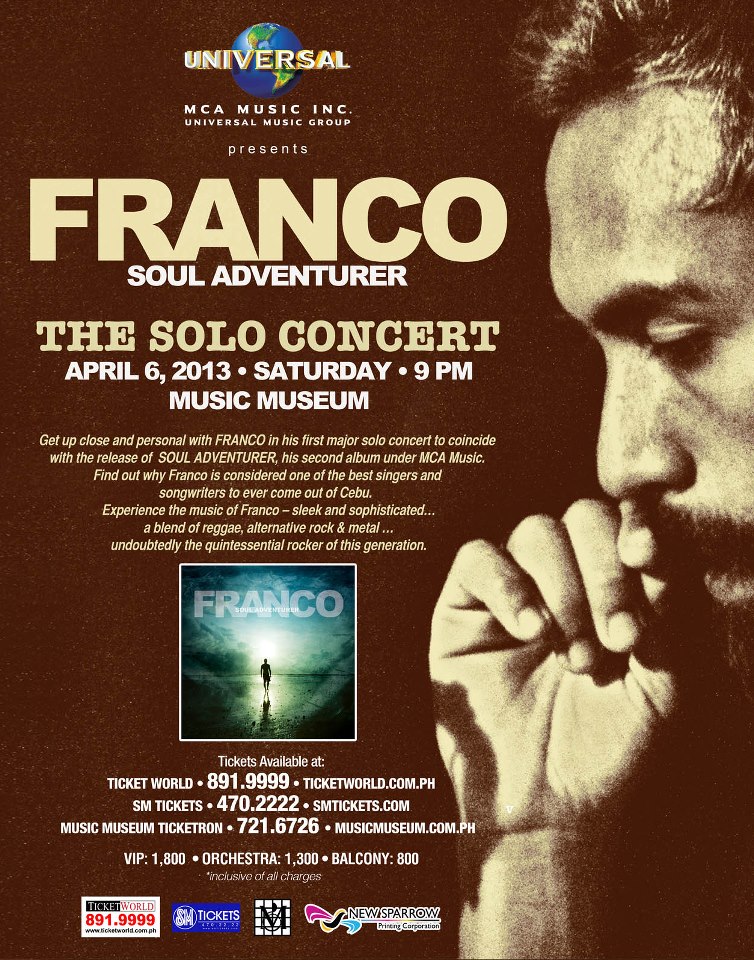 Soul Adventurer is Franco’s much-awaited follow-up to the critically acclaimed debut eponymous album, which was released four years ago. Since then, many have been wondering if Franco Reyes could live up to the expectations of delivering the same aggressiveness and unique musicality that made the first album a hit. Moreover, the pressure has heightened since the exodus of his supergroup compatriots last year: now a solo artist, he has but a session band performing with him in gigs.

Reyes takes a hands-on approach in creating the album, doing all the vocals, guitars, and bass. For drums, he enlisted the help of former Franco member, Jan Jan Mendoza (who is also the drummer for Urbandub). The overall production quality definitely matches the predecessor, with equal focus given to Reyes’ vocals and instrumentation, and Mendoza’s drums.

One thing that clearly distinguishes this album from the previous release is its overall shift in lyricism and form.

Love-inspired songs still comprise the bulk of the album, from the engaging Moonset to the darker Blame and Razor. It is important to highlight the album’s penultimate track, A Lover’s Fire, which is not quite the conventional Franco song. Instead, Reyes sings about passionate love, while exploring electronica and soul. Coupled with his soothing vocals, it’s the album’s – and possibly even Reyes’ – most sensual song to date.

There are more Rastafarian themes that can be heard throughout the album. This is very much seen in the Uprising (Let’s all step into Jah light / divided we define our weakness / so unite and say hello to Jah promise land), where Reyes also channels Bob Marley in the latter part of the song.

What makes Reyes unique is how he successfully intertwines reggae and rock in his songs. The opening song, To Survive, is written tinged with drops of reggae parlance in one of the opening lines. (But they can’t touch I / No never touch I / I say). The genre is also utilized in Better Days (which was co-written by former Franco guitarist, Gabby Alipe) and Renewal.

Freedom is also a key theme in the album. He connects it with A Beautiful Diversion (Riding the wave / making this moment free your mind). But Reyes encapsulates these feelings with A Prayer, the album’s last song, a beautiful acoustic anthem about his longing to be free from loneliness.

Soul Adventurer does not disappoint. While the album’s form is lighter than its predecessor, it is compensated by Reyes’ diversity and versatility in songwriting and musicality. Sure, this album may not be as definitive as the previous one. But one thing’s for certain, this album proves that Reyes is continuously evolving and innovating, and that’s what the Pinoy rock scene needs right now.